So a few months ago I had this regular Doctor appointment. Anyone with Crohn’s knows,this is an untrue statement.But that’s another story.

As it turns out. He was not an old gnome of a man, who repaired magical books with restricted tools and spells. Nor was he a gatekeeper to Hogwarts or Narnia.

How had I missed this Bookshop? It was in a small building that suggested a Pharmacy or a Bookshop. Which apparently is all it takes to get by me. I know, because I had gotten lost twice before (previous doctor visits) and used their parking lot to turn around in.

We went in and I was surrounded by novels and the coolest bookshelves. Lining the walls. Which suggested you had secretly left the USA and found the coolest entryway to a forbidden library.

And that was just me thinking I understood where I was.

Someone said something like, every book you see is a signed first edition.

I felt like I had just received my Hogwarts letter.

Someone was rambling on about something when I asked  Neil Gaiman? Do you have Neil Gaiman?  They pointed. I walked over to the shelf. There they were, sitting among other titles. American Gods, The Ocean At The End Of The Lane and a hardback with Neil himself sitting in a highback chair. His newest book of essays and memories.  I  picked up The View From The Cheap Seats. Opened the cover slowly. There it was. His signature and a stamp verifying the first edition.

I kicked myself for not putting on rubber gloves. Or at least bringing a handkerchief . Idiot. 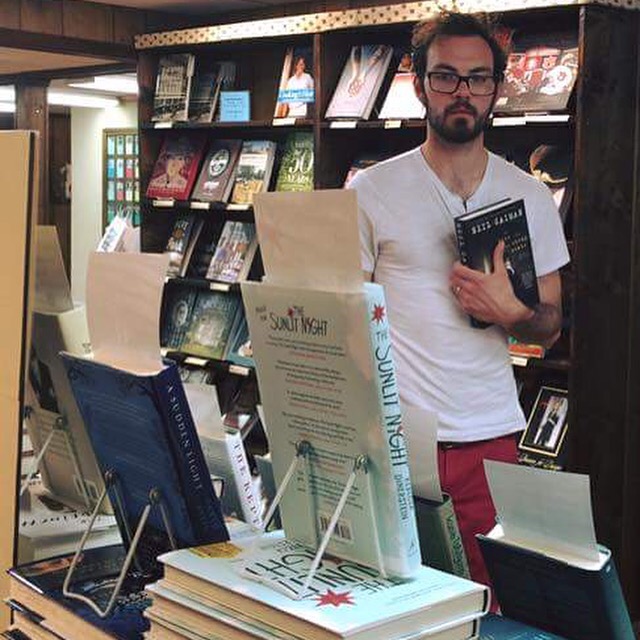 Me holding it together with my first edition. Waiting to wake up.

I remembered when L and I started dating she had text me one night; Bethune. David Sedaris is going to be at Barnes and Noble. I have to work. You should get me a copy and his autograph for my birthday. Or something like that.

I also recalled definitely goofing up that opportunity and not making it to that signing.

I looked around for Sedaris. A comedian I absolutely insanely love listening to and reading. The guy is a genius. There he was. Let’s Explore Diabetes With Owls. And it wasn’t in the health and wellness section either. This place really had it together. Had they actually read all of these books? How did they get all of these signed copies? Did they have super close relationship with the Authors? Were they involved with the mafia? Did they have a fifth grader scribbling signatures in the back?

I looked at the signature. I couldn’t read it. Definitely legit. And a stamp verifying it as well.

I made my purchases and felt like Nicolas Cage making off with the Declaration of Independence. Sedaris  and Gaiman, surely it couldn’t be this easy.

It was. And I plan to return come December. You know,that’s when my next extra normal Doctor visit is. At least I have something to look forward to.