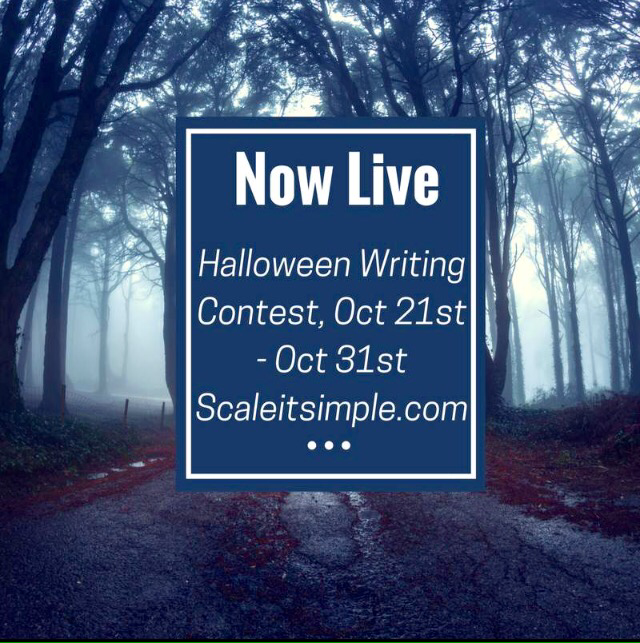 It was one of those nights on cemetery lane that made you feel electric with energy and somber with thought all at the same time. The air was crisp, dead leaves scattered as they ran underfoot and glided overhead, filling the night with noise. The moon was full and luminous casting an eerie light on the scene below. Halloween was in full swing, the streets were abuzz with hooded figures and lively children enjoying their annual candy hunt.

Hidden from the action at the end of the long lane of perfectly decorated houses stood the towering and dark-windowed number 13 cemetery lane. Behind it, the forest stood lightless and desolate, a depressing shadow on a lively scene. It was in this very house at this very moment that

something old was waking up.

Just as little Angela Lynch was stopping at the last decorated house. She was noticing this one…Angela wasn’t afraid. She was just curious. What kind of candy would be in  this house? She thought.

She walked up the path to the steps of the house. The leaves  clearing in front of her.  She still wasn’t afraid. She knocked on the door. The one light at the back of the house, flashed back into darkness.

She frowned. Raised her fist and knocked again.

The door rattled and cracked and slowly moved open into the darkness.

“Hello?” She asked. Still unafraid. Setting her candy basket down. She stepped into the house. The emptiness filled the stale air. She set her flashlight by the door. Letting her eyes adjust to the darkness. Adults were always bringing things to change the rooms they entered. She didn’t want to do that. She wanted to learn something from this room. She wanted to adapt. To understand it’s emptiness.

There was a staircase. A bookshelf. And a room…open…with a high backed leather chair…and a desk. With paper and ink…someone had been writing.

The rough whisper came from the stairs.

“I’m not afraid of anything ” Angela said firmly.

“There’s nothing to be afraid of.” She said confidently.

The shadow extended an arm towards her. The front door slamming shut behind her.

Angela felt cold. She closed her fists and pinched her leg. “Yes. I’m always sure. My name is Angela. Angela Lynch. What’s your name? Are you a monster? Or a demon? Or a person?”

“You wouldn’t be able to say my name.” The shadow breathed heavily. Slowly moving down the steps to the floor with Angela. Which changed everything. Because some dark things are much easier to accept while  they are across a room or far away. But when they are there with you. They consume so much more .  “I am none of those things. Just old. Very old. ” It said. Slowly coming into the light from the window.

She was surprised. It was just a man. A tall man. But darkness hung around him. His skin almost transparent. He could see her surprise and moving to the window said “Every year the monsters come out to play. But I’ve lived long enough, 900 years, do you know what that’s like? To live a lifetime times nine? “

Angela looked around the room. The books piled along the walls a lifetime of reading lists.

He continued “it’s long enough to outlive all of the history. Watch your existence and memories turn into folklore and children’s stories. I had a beautiful bride. But they burned her. I was the most powerful warlock and she was the oldest vampire. 900 is long enough to watch men turn into the things they fear and hate. They became monsters and we became shadows.”

Angela sat with her legs crossed sifting through the books with 300 year old handwritten notes in the margins. Stuffed with letters folded as bookmarks. She looked around “why don’t you Ever go out? There are a lot of good things left.” She rubbed her nose fighting off the urge to sneeze.

“I’ve lived long enough. I’ve seen all there is. And every Halloween, We would go out among the people and keep current. I think it’s more than I could take now.”

“You can leave if you wish.”

Angela looked around. All the books. “Do you have friends?” She asked.

He looked surprised. “People come…the pizza man. And I’m really close to the Chinese delivery man. They have the best sesame chicken. It’s secret is …”

” I mean real friends. People who spend time with you.”

“No. I’m afraid…I don’t think I’m ready. This house is so big anyway. Half the time I’m afraid of it. I only stay in these rooms.”

“Well it’s a good thing I’m not afraid of anything.” Angela said standing up.

“It’s Halloween no one will expect anything less than …your dark creepiness thing. Come on, we’re going out besides, you owe me candy. Have you ever had falafel? Don’t. It’s over rated. Now let me tell you about tacos.”